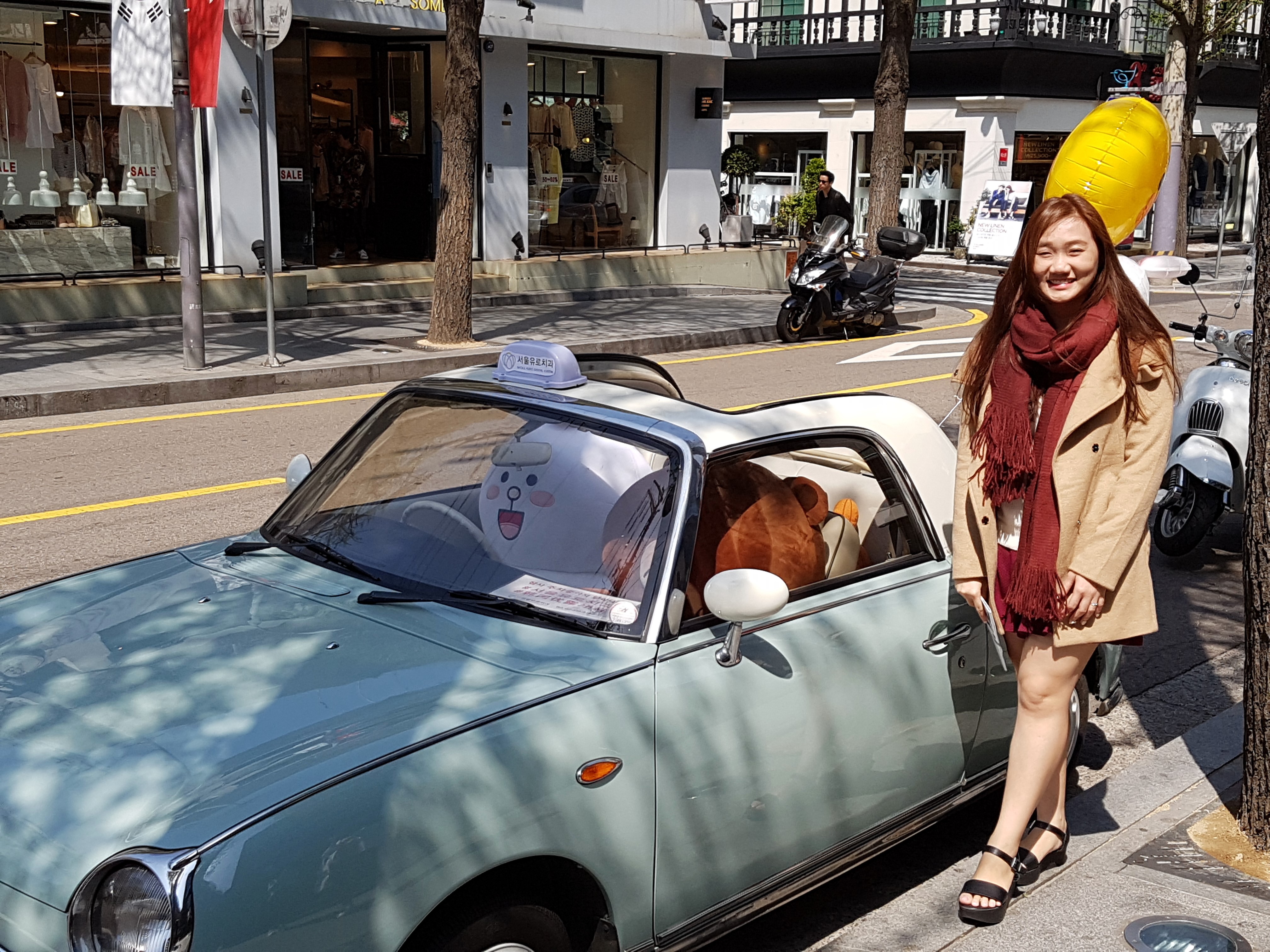 Today we went to the most expensive district of Korea, Gangnam-gu! Our first destination was Sinsadong Garosu-gil. We reached during noon and the streets were still fairly empty. In Garosu-gil, there are many quaint cafes and local retail designer stores.

While walking, I noticed there were people wearing really little clothing for the weather, cropped tops paired with mini skirts and accompanying them would be a photographer. We couldn’t comprehend what was happening but was enlightened by our pre-wedding photoshoot agent that they were models posing for local retail designer shops that are preparing for the upcoming Summer season. No wonder they were posing in the streets with cropped tops and short skirts in such chilly weather. I can only say, work is hard (hahaha).

Continuing our stroll down the street, we noticed something and we got really excited. Okay correction, only me.

I mean where can you see this in Singapore? Neverrrrrrrr (okay maybe soon, who knows). Seeing this also means that the Line Cafe is right around the corner which we were right. There were so many photo opportunities in the store and poor hubby had to be my photographer.

The selection of food in the cafe. If I could, I would seriously buy them all!!

Couldn’t resist so I bought one of them each (KRW3,000 per macaron)

I wanted to buy an icecream but then.. no snacks before lunch so 🙁

After shopping, we proceeded to find the restaurant recommended by Ladyironchef, Lobster Shack. It was pretty difficult to find because it’s located at such a secluded place. If we didn’t have a picture of it beforehand, we would probably have had walked across it without noticing that it’s there.

The staff knows how to speak English so it was easy ordering. They have both shrimp and lobster versions for all the flavors and since we were there, we definitely had to order the lobster ones. The prices were very reasonable given the amount of lobster given. I’ve half expected it to be diced lobster meat to be served but we were wrong. So wrong.

Look at that huge lobster meat

I was really happy with my Cajun Cheese order. The portion of cheese was generous and it went so well with the lobster. Both were really chewy.

If there were more of you, you can go ahead and order the platters. Hubby was practically drooling over those photos but there were only 2 of us and I ain’t a fan of seafood so nah but he’s still happy with his roll. They also have a guide on how to remove the shells as their table mat. Pretty creative I would say.  Definitely recommended because at the end of our 10 days trip, hubby still rated this as one of the best meal in Korea.

After eating, we had so much time and hubby wasn’t exactly interested in shopping so we went to Dosan Park. I didn’t research about it at all and since we saw that it was near Samwon Garden which was where we were going to have dinner, we decided to drop by.

When they said it was a neighbourhood park, they weren’t kidding. It was really small. Smaller than the parks in Singapore (haha) but see what I found. Tulips! So pretty. Again, envious of all the wild flowers in other countries. The only place where we can see tulips in Singapore is probably Gardens by the Bay.

We sat there for awhile observing people and realised that Koreans love dogs. Even though it was only the second day, we’ve seen so many owners walking their dogs on the streets and they prefer smaller dog breeds. Saw a lot of Corgi around.

After which we went to The Coffee Bean & Tea Leaf nearby. Koreans love cafes (so do I). You can probably find a cafe every 100m. Not exaggerating.

The rest of the day was spent walking around Apgujeong and then it was the highlight of the day (at least for me) *cues drumroll* SAMWON GARDEN!!

This tops off our list as the most expensive meal for our entire Korea trip. The bill came up to KRW132,000. I personally felt that the price was worth it but hubby thought it was a little overrated. Samwon Garden is well-known for their marinated beef bbq. They serve both US Prime Beef Ribs and Korean Hanwoo Beef Ribs. Many reviews online said that the Hanwoo beef wasn’t worth the price (KRW58,000) as compared to the US Prime Beef Ribs (priced at KRW41,000) which was as tasty as the former. Having watched Running Man and other Korean variety shows and salivating every time how they make a big fuss when they are eating Korean beef, I just had to be my own judge.

We ordered 3 items on the menu, the US Prime Beef Ribs, Korean Hanwoo Beef Ribs and a main dish, soybean stew (KRW33,000). The reason why we ordered the main dish was because a fellow Tripadvisor recommended that if we want to be served the full side dishes, we had to order a main dish.

The side dishes served for BBQ was all right, not that fancy compared to other restaurants but the one for main dishes? We were astonished. They actually served a full plate of beef and another plate of saba fish as side dishes. When the beef came, hubby and I were really puzzled and we wanted to tell the waitress that we didn’t order that. After googling online, we realised that they were part of the side dish selection. Wow.

And the verdict after tasting both of them? They were good, really good. The Korean one as compared to US had a stronger beef taste and you can really taste the fragrance once you put it into your mouth. The meat was much more tender than the former. But then again for the premium of an additional KRW17,000 for this? I probably won’t order it again because I can settle for the US one which tastes great as well.

Overall, I loved the bbq so much. If it wasn’t for the steep prices, I would have ordered more portions (hehe).

It was getting late and really chilly so we decided to return to the hotel so that we can rest early too since it was our photoshoot the next day.

Oh and see what happened to our macarons in hubby’s bag (hahahaha). I guess it wasn’t a smooth ride and they ended up having motion sickness. Cony especially looked like it barfed.

Directions: Metro Line 3, Sinsa Station, Exit 3. Walk straight for around 3 minutes and it will be on the left.

A mother to a toddler. I blog mainly about motherhood and cover a range of topics from cooking, parenting, lifestyle and most importantly baby/mummy related deals #Taobaomama Please drop an email to [email protected]il.com for all enquiries :)